The damage is enormous on the grounds of the Bible school TCI (Tavriski Christian Institute) in Ukraine. On March 10, the site was occupied by Russian soldiers until the ‘liberation’ at the end of November. The area with five buildings was looted, safes were bursed and all valuables are gone. The campus was transformed into a military base, barracks and a hospital. Russians brought their crematorium trucks to the campus and burn the fallen soldiers.

The campus in Kherson, Ukraine, served thousands of young Christians in the south of the country before the war started. In addition to preparing new pastors, missionaries, and church planters, TCI served as a Christian camp and community center for the faithful in the Kherson and Mykolaiv regions of Ukraine. And many missionaries were being prepared to be sent out to mission fields in Central Asia. 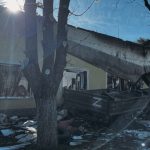 In an online meeting on November 29, about a hundred people were updated about the current situation. Director Valentin Siniy: “The library was one of the largest Christian libraries in the country. There were about 15,000 titles, plus newspapers, posters and magazines. Christian literature from our library ended up in rubbish dumps. The canteen and the remaining dormitory have been turned into a pigsty. That’s because the Russians see us as a cult that needs to be eliminated. It is a battle between light and darkness that took place here. A sea container full of valuable theological books from California that we received just before the war was also deliberately set on fire.”

In the night of August 28 to 29, three of the five buildings were destroyed. Russian soldiers desecrated the building whichwas earlyer dedicated to the Lord. TCI lost the office, the library, the church hall and a dormitory. When the TCI employees saw the devastation and the remains of the buildings, they couldn’t hold back their tears. The place that welcomed thousands of young Christians since the start in 1997, where children and youth camps were held and the place where the officially certified bible training was housed.

TCI students and staff were forced to leave the campus during the early days of the Russian occupation. Teachers and students became refugees in their own country. Most traveled to the west of the country, while others went to other countries near and far. Ukraine ‘lost’ 500 pastors due to the war, while the spiritual need is now unprecedentedly high. However, TCI’s ministry has not been stopped by this inexplicable war. The work of the school continued. TCI personnel now operate from the city of Ivano-Frankivsk. The education of theology students continues and they also focus on humanitarian work. The Dutch organization Worldpartners and TCI work(ed) together to help thousands of refugees and people in war zones with food, transport, medical supplies and closing windows.

At this moment the plase is still not safe. There may be mines. Snipers fire is close and mortars fly overhead. TCI is already collecting money for the reconstruction. Finances aside, it is expected to take another three years to rebuild the campus. Watch the movie below for an impression. People with a creditcard can make a online gift through the TCI website.