In 200 days of war, more than 80,000 Ukrainian homes have been destroyed. In the spring, the city of Irpin was bombed and distroyed. There were a lot of shooting in two months time. More than 3,200 shelters in the city were damaged, with 1,483 private homes completely destroyed. One of the destroyed houses belonged to the pastor couple Petro and Lilia. They recently got a new ‘tiny house’. 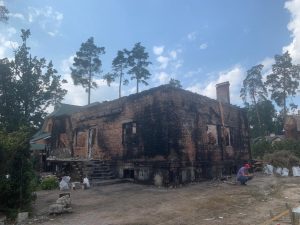 The remains of their once beautiful home.

Their house was set up as a headquarters by the occupiers because it was located on a main road. Before they were forced to leave the suburb of Kiyv, their home was set on fire, burned and was left behind as a ruin. On 8 september when the  ground was recaptured, the Secretary of State Antony Blinken visited Irpin himself. He was deeply impressed about the situation of the buildings and personal situation of many Ukrain citizens.

Act on the word

The Worldpartners Foundation puts its words into action and has built a tiny house in Irpin with 32 m2 of living space. The turnkey cottage was built in a factory in Moldova and loaded onto a truck. A crane lifted the two sea container-sized parts into place on the foundation more than 500 kilometers away. In early September, the key transfer was held and Petro and Lilla moved in. The foundation wants to rebuild dozens of these types of houses because it is quick and cheap and the residents are well protected into the winter, because of the high insulation value of their new compact home. 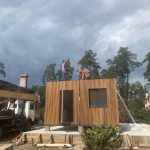 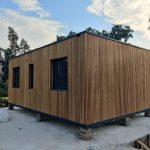 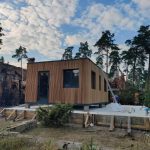 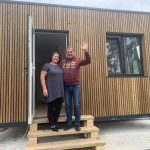 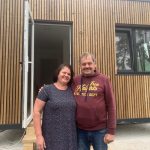 Three houses per week can be produced in the Moldavian panel factory. The house was made from a drawing board, so that the house can be placed locally and the transport costs can be reduced. The costs of a complete house including kitchen, bathroom, underfloor heating, electricity and water connection start around €35,000. The houses are currently available in three different sizes.

In recent months, Worldpartners, in collaboration with Dutch partners Kerk in Actie, Kom over en Help, Woord & Daad and EO Metterdaad and four implementing Ukrainian partners provided more than 38,000 Ukrainian households with food parcels and sowing and seed products in the reconquered areas. The food project was recently completed, but the need remains high, the war has already lasted 200 days too long.

More information
If you would like to know more about this rebuilding project, please contact Hans Hamoen of the Worldpartners Foundation. Donations for the affected Ukrainian population are still welcome.