“Our factory hall became a food bank to help refugees.”

“I was in the decorative lighting industry and traveled the world as a sales manager. I enjoyed it but it was not my calling.” Anatol Malancea changed his career because he met the right people at the right time and they moved him into the right direction and invested the company. He currently is the managing director of a team of 30 some people working in a panel factory in Moldova. His company ‘Uniqa’ is about to complete the production and mounting of 27 sustainable waterfront houses in Nijmegen, NL using a patented technology of prefabricated walls. Besides customized homes Uniqa also manufacturers holidays homes, garden houses, tiny houses and panelized walls for residential developments.

Anatol is a Moldovan Christian with a big heart. As a young adult, he had the opportunity to be an intern in America in 2003. A life changing experience that he grabbed wholeheartedly during which he learned a lot about business processes, the American culture, language and much more.

A few years earlier, he witnessed the collapse of the Soviet Union in 1991. He saw unemployment and corruption increase, because there were few companies. Male compatriots in particular left for Russia or Western Europe with a better future perspective and living conditions. The result was disrupted families where the man of the house was often absent, because he worked far away to earn money for his family.

In the early morning of February 24, 2022, they heard sounds of bombs falling down and soon thousands of refugees were escaping to the border crossing between Ukraine and Moldova. Convoys of emergency vehicles rushed to the border, while crowds of disillusioned refugees made the opposite move. The panel factory was shut down and Anatol discussed the situation with his employees. Because the factory is closely located to the border of Ukraine, they decided to help the refugees as much as possible. With their own transport they brought many refugees further into the country and to the capital city. Customers from Switzerland and the Netherlands sent trucks of food and part of the factory warehouse was set up as a large food bank, where the refugees and host families could get food supplies.

“Convoys of military vehicles rushed to the border, while crowds of disillusioned refugees made the opposite move.”

Together with other local leaders, Anatol used their board positions, charitable institutions and contacts with other businesses, social organizations and churches to bring together resources for the growing number of Ukrainians arriving in Moldova.

In three months, more than 50,000 refugees were helped with mainly food, shelter and medical supplies. Many refugees were forced to leave home. Their property has been forfeited, destroyed, or burned, or their land has been occupied. Their future lies elsewhere. Uniqa, Anatol’s company, is currently developing a concept of compact, energy efficient, Lego type assembly tiny houses that can be realized fast and in affordable way. The first house has already been made and placed in Irpin, near Kiyv Ukraine.

“For me, there is no difference between doing business and my faith. The company is a platform cooperating with people and make an impact. Every working day we start with a moment of spiritual reflection. The product is a sustainable alternative to cement and stones and thus has less impact on His creation work. Personally, I want to bless others, and with the company, bless employees and their families, customers and the recipients of the homes.” 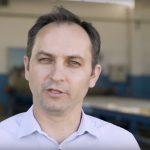 Anatol Malancea (1979) lives in Eastern Moldova. He likes to do business, likes to play tennis or hike into the mountains. He sits on a number of NGO boards and is involved in a various ministries including a church planting project.

More information can be found on the Uniqa website; www.uniqa.md