The facts are huge. From March to August, the Worldpartners foundation moved emergency aid and helped the affected Ukrainian population. In total, more than 3,000 tons, 3,000,000 kilos of food and seed potatoes were offered to more than 38,000 households. 400 tons of seeds and seed potatoes have been multiplied, with the result of 6000 tons of food have now been harvested by Ukrainians themselves. To carry out the food aid project ‘Aid 2 Villages’, 60 transports were needed in Ukraine and 46 from the Netherlands. Not all without risk. It even happened that once a army tank pulled a truck to reach its destination safely.

In the first instance, emergency aid was immediately provided after the Russian invasion. In the first period we bought a lot of food locally and transported it to eastern and western Ukraine. As a result, we helped quickly and with local food. The next and after one phase, the ‘Aid 2 Villages’ food project was set up. The aid was carried out by four Ukrainian partner organisations*, who ran their hands from April to August to distribute all the goods and have them get to the right place. Worldpartners is extremely grateful for their efforts and proud of the work they did week in, week out, sometimes at the risk of their own lives. In the Netherlands, three partner organizations were involved: EO Metterdaad, Kom Over en Help and Kerk in Actie. The last named organization received more than 1.5 million euros through the generous proceeds of Giro555, intended for the affected Ukrainian population. 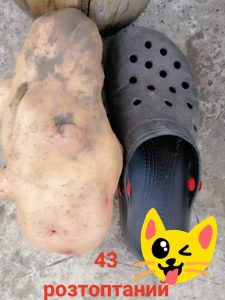 A lot of work done

Project coordinator Jort of the Worldpartners foundation looks back on an intensive and special time: “Although we have been working in Ukraine for 25 years, the scope of this project was larger than we were used to. In a very smooth manner, with relatively few resources and intermediate layers, we were able to distribute and coordinate a lot of help from our office in Wageningen. God touched our hearts to move. We pray for the recipients and colleagues and the goods and it was special how quickly we could switch. A friend summed it up: “The longstanding relationships have led to the impact today. That could only have happened under God’s direction.” And that’s how I feel. We receive many messages from Ukraine from people who are very grateful for, for example, the tasty potatoes. The result of the seed and seed potato distribution is the harvest of about 200 kilos per household.”

“The longstanding relationships have led to the impact today. That could only have happened under God’s guidance.”

Sometimes it was difficult too. Deliveries were delayed, the border crossings were a barrier and things broke down along the way. But without (spiritual) struggle, there is no victory. The transports were also a challenge. Many drivers did not want to drive because of the shortage of diesel and because of the days-long waiting times at the border. Jort regularly had to disappoint the recipients and hope and pray that it would work out tomorrow. When there was hardly any fuel, a truck with diesel became available in a special way. We were able to continue with the transport and the transport costs were paid in kind… with diesel. 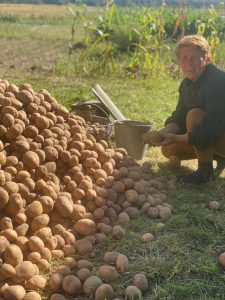 The project has been completed and final reports have been written for partner organizations. The cover photo shows Olena, one of the thousands of recipients of seed products. She is so happy and grateful for her own crop that she has grown so that she is prepared for the coming winter. Jort: “You do your best to bring food there ‘for tomorrow’, but also seed potatoes, food for the coming season. That is actually the success factor. You not only help here and now, but also ensure an impact in the long term. And the harvest is handled well.”

Want to be more meaningful

He continues: “The need remains unprecedentedly high. We are now more than two hundred war days further and the war in Eastern Europe continues at a brisk pace. We want to remain meaningful, among other things, by replacing destroyed houses with ‘Tiny houses‘. the first sample is placed in mid-September and we are investigating whether we can apply it on a larger scale. Through another Worldpartners project in neighboring Moldova, we can make three complete panel houses per week. Our mission is to stand up for the needy fellow man. It motivates us to continue and to continue to be of significance to our fellow man in need. Because that gives real satisfaction!” 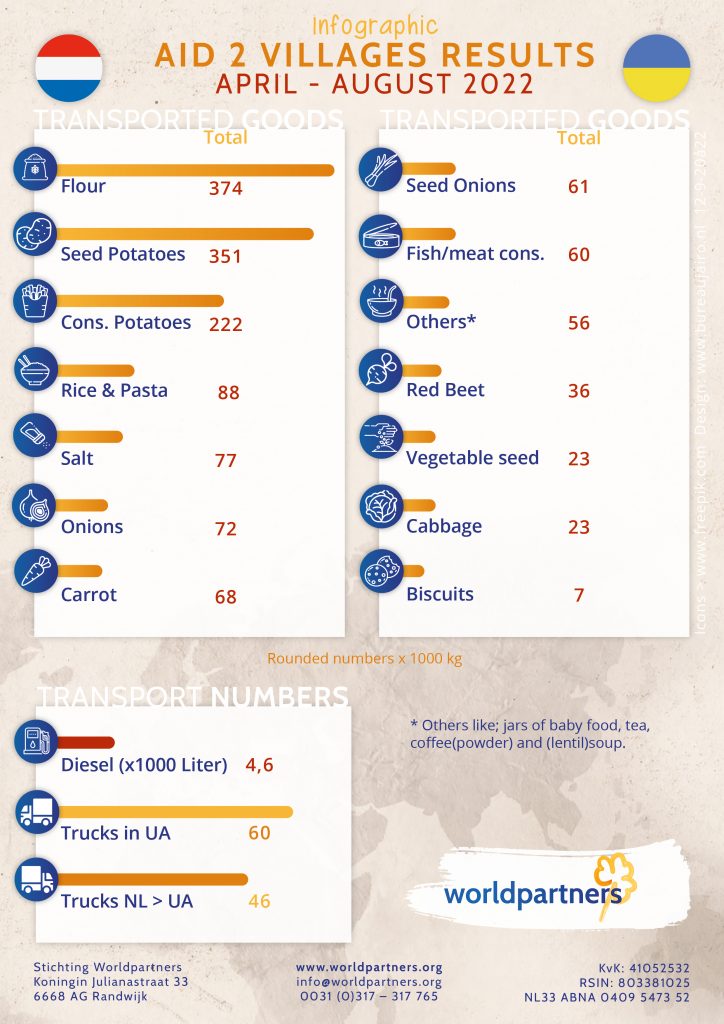